One month to wait.

While you're all pondering about your leisure reading recommendations (keep those coming, y'all), WOULD YOU GET A LOAD OF THIS?!!!

First of all, check this out:

Sorta a supergroup going on here: Daryl Johnson moving all over on that bass, genius Brian Blade on drums, Trixie Whitley showing herself to have inherited her late father Chris's mindblowing pipes and phrasing, and Daniel Lanois at the helm of it all (here he plays minimalist piano). They're releasing an album at the beginning of November under the collective name Black Dub, and I have palpitations in my excitement.

And if there were any doubt left in anyone's mind, after all these years of my rhapsodizing about/ stalking him, that I would have Daniel Lanois's baby, I submit Exhibit A:

You know, couple years back, I bought Dan the Man a drink or two, and got a kiss in the bargain. If Neruda weren't so much the man of my dreams and love of my life, I'd be regretting not having worked that moment a little harder...

I got home last night at 9pm to find that someone had left the last novel of the Stieg Larsson trilogy at my door. I said, "Well, I'll just read one chapter and then go running and head to bed." I finished the book a few hours later.

So now I need recommendations, people. What I'm looking for: decently written contemporary prose, absorptive plot. I tend to like spies and capers and thrillers and mysteries, and not so much relationshippy books. Stuff that will provide a diversion from the intensity of working on the book, but still with enough substance and style that I can look myself in the eye the next day. I've recently liked Mankell. Chabon. Eco. I laughed out loud many times reading _The Financial Lives of the Poets_. I love much Richard Russo, and read _Straight Man_ every year, as a ritual. I liked _The Rule of Four_ in a geeky way, and also _Dr. Strange and Jonathan Morrell_ (I think I'm getting that title wrong/backward, though.)

I've never read J.S. Foer, or D.F. Wallace, or J. Franzen, because they all seem to have a faint aura of pretentiousness around them, which I may be wrongheaded in perceiving. I'm willing to be talked into them if anyone wants to make a case.

Really, I just need to have something besides criticism to ease me into sleep. What have you got, people of the interworld?
Posted by Renaissance Girl at 9:06 PM 5 comments:

In praise of difficulty.

The other night I was talking to Thing 1 about homework. He was lamenting the fact that he has a school project requiring research and synthesis, and was frustrated that doing that kind of work is hard, and wouldn't school be a lot better if it wasn't so hard? I talked to him about how I could relate to what he was feeling because of my book project. He's well aware that it has been a difficult process for me to work on this book, sometimes resulting in sleeplessness, depression, crying fits, manic exultation, distractedness, and all sorts of other responses in me. (Sweetly, he often asks in his prayers that he be able to finish his homework and that I'll be able to get work done on my book.)

Then he asked me, "So, why do you do it if it's so hard?" And my answer surprised him, though it will probably surprise no one who does this gig: "Because I love it."

"You mean, you love that you'll have a book?"

"No, I love the writing, the researching, the stuff I'm reading, the thoughts I'm thinking. I love the whole process. And I love what I'm learning, which is only happening because I have to figure out harder stuff than I knew I could."

And I do. I LOVE this work.

It's not just the subject matter and the life of the mind and all that stuff, I realized. It's also that it's hard. Some know that I have a sciencey background, and I used to teach human anatomy. I really, really love dissecting bodies. It's fascinating, and it's revelatory, and when I used to teach folks about that glorious machine, I loved turning them on to the elegance of it all. But it wasn't HARD, by which I mean, I didn't struggle through it--not the understanding of the body as a set of concepts or as a model of applied physics, not the names of things or their interconnectedness, not the piecework of dissection, not any of it. Which is why I ultimately decided that I couldn't do it for a living, couldn't teach that way for the rest of my life.

Those bouts I have with self-doubt, those days when I spend 8 hours and can't finish a paragraph, those gut-punch, nauseated moments when I realize that I have to scrap a month's work on a chapter and start over (that's a month's work on its CURRENT DRAFT, to say nothing of the months and months on the prior draft that had to be discarded)...they're why I love this shit. Because they mean that I'm not stopping at the answer that first occurs to me, the easiest and most familiar solution to a problem, the most well-trod, the most evident to dissection. They mean that I'm working through to ideas complex enough that they REQUIRE thinking, and rethinking, and rejecting, and rethinking again. There's something sublime about that possibility, and something profoundly humane.

Moria has written a couple of times about difficulty and how important it is to accept it, embrace it, and as usual, she arrives precociously at something I should have articulated for myself--out loud, that is, rather than intuitively--long ago:

"Difficulty is where work comes from; where thought is at its most active, where newness forms itself....I’d like to stake a claim for the difficult. Our culture —academe; beyond— so often rejects being-in-difficulty as bad, just as it rejects sadness or fear or anger as bad. What I want to hear more of: good, be defeated, be in difficulty, good, let this rough you up a bit and then fight back. Good."

Posted by Renaissance Girl at 11:18 AM 4 comments:

All hail the drawing board!

* This Donne chapter is not cooperating with me. I'm thinking of abandoning the pretense of "revision" and just saying "I'm writing a bonus chapter." Sheesh.

* I learned tonight that a random colleague whom I hardly know has been, authoritatively, filling folks in about my private life, about which he knows nothing. Not surprisingly, the info he's been broadcasting is wrong. I'm unaccountably enraged about this.

* When I go running later tonight, there will be no one waiting for a phone call to say I'm home safe, because Neruda's 8 time zones away. For that matter, I'd like to call him right now, but it's deep REM stage time where he is.

* After all that work, my house has gotten cluttered again. Should have just spent that cleaning time on the sisyphean task of writing.
Posted by Renaissance Girl at 7:58 PM 4 comments:

Have you heard?
Posted by Renaissance Girl at 8:20 AM 5 comments:

My mood is sinking again as I rev up the full-scale revision on the Donne chapter. Again, riddled with self-doubt, with skepticism about my argument, with exhaustion. Thus I introduce what I'm going to call the I Can Meme, self-congratulation in five eyebrow-raising parts. Though I am not one to participate habitually in memes, this one may serve to remind me, in these dark hours, that I do have SOME skillz....

1) I CAN read things at very great distance with my 20/10 vision. Which makes me unbeatable at the A-B-C car game.

3) I CAN navigate anywhere, anytime, due to the weird GPS/compass in my brain; I can always point north, and I'm never lost.

4) I CAN read Irish. Used to speak it, but that skill is two decades rusty.

5) I CAN identify the make and model of most airplanes as they fly overhead.

Not sure whether these skillz can counterweight the burden of revision, but there you are. If you have found yourself surprised by any of these five, consider yourself tagged, in my comments section or elsewhere, and give us your own unusual can-do list....
Posted by Renaissance Girl at 11:33 AM 3 comments:

I have found that I work better when I'm listening to music. And though different kinds of music produce different tones when I'm writing poetry, the optimal accompaniment for the writing of this book has been classical music. And even there I must sub-qualify. I get most done, and in least time, when I'm listening to Baroque stuff. The Baroquer the better. Bach is very productive for me. Handel is good. Locatelli good. St. Colombe and Marais. Something about the involutedness of the form, the mathiness of it. It appeals to the close focus and the intricacy of writing scholarly stuff. If I listen to Vaughan-Williams or Rachmaninoff, I get too seduced. Beethoven's too wide-focus. I need the attentive studies, the tight work, and the play of the Baroque.

What about y'all? What music jump-starts your juices?
Posted by Renaissance Girl at 12:59 PM 8 comments:

The rise and fall of "Spa September"

So I had this notion that I would spend September, having concluded my bookdraft, taking care of me a little bit, in that half-luxurious half-abstemious spa-resort type of way. A third of the way through September, let's review my progress, shall we?

PLAN: Sleep 8 hours every night.
REALITY: Ha! Kids started school and have to be out the door cruelly early. Also, my refrigerator is going on the fritz and I've been spending many middle-of-night hours researching possible replacements. Also, I got in bed the other evening saying to myself, "Ah, I'll just read a chapter of this second Larsson novel." I finished it several hours later.

PLAN: Eat only wholesome foods from my garden.
REALITY: Leftover supplies from camping include Skittles, which I can't resist, and I had to make cookies for a writing group meeting at my house, of which there were many leftovers.

PLAN: Yoga or meditation every day for 20 minutes.
REALITY: You'd think that 20 minutes wouldn't be too much to ask, wouldn't you? Wouldn't you?

PLAN: Clean every surface of house, and take unused stuff out to donate.
REALITY: This one I did, actually, over the last several days. Though my garden is a weedy mess.

PLAN: Bubble baths.
REALITY: Nope. Not least because I've been having drain issues--my ancient house has a drum trap that has permanently decided to go on strike, and if I bathe, it'll take two days for all that water to drain. I did, however, replumb my bathroom sink a couple of days ago, so it's draining nicely, at least.

PLAN: Splurge on full bottle of that fancy foaming face wash with lemongrass, a sampler size of which I lifted during one of my fancy hotel visits last year.
REALITY: $50 for 16oz? Are you kidding me?

PLAN: Get my sister to go buy me some new clothes.
REALITY: I'm on leave. What the hell do I care what I'm wearing?

PLAN: Wake refreshed each morning and leisurely begin revising on Donne chapter, to be finished by end of September.
REALITY: Confronted reality that Donne chapter needs major revising--burn down and start over type of revising. So I'll be banging my head against that. After the weekend. My new self-deadline of Oct 31 for that chapter will allow me a couple more days of not-quite-spa living, before Monday brings the structured schedule of fall in full force.
Posted by Renaissance Girl at 12:18 PM 2 comments:

Ode to the Tail-end of Summer 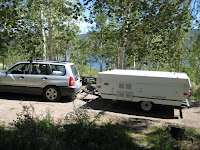 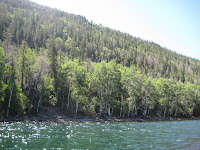 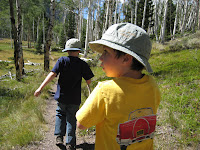 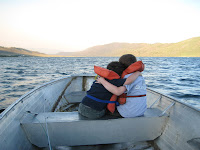 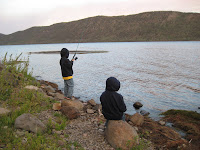 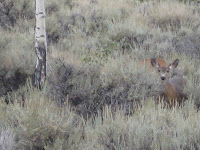 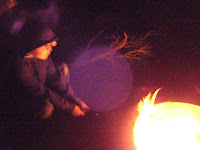 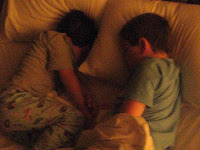 (Bookdraft done.) But first, I'm taking the trailer, the Things, and the fishing poles and heading for higher altitudes. Labor Day, indeed.
Posted by Renaissance Girl at 1:19 PM 1 comment: