Finally getting around to it....

Squadratomagico was kind enough to give me one of these sumptuous suckers, called the "inspiration award," for which I am grateful.

The rules:
* Put the logo of the award on your blog
* Link to the person from whom you received the award.
* Nominate other blogs.
* Put the links of those blogs on your blog.
* Leave a message on their blogs to tell them.

Here are some who inspire me:
1) Always Winter - Because she's colder than I am, but manages to write all the time. Plus, she's made it beautifully through a rough period.

4) Moria in Excelsis - Just because she's there. Again.

A constant irritant, like a finger tapping, tapping, tapping on the forehead, which continues underneath all other daily activities. For months on end. Going to the supermarket? tap tap tap. Chopping chard? tap tap tap. Driving to school? tap tap tap. Perpetual and insistent, until the words click into place and the tapping stops. For that poem. The ones in progress keep tapping.

A strand of orange pulp stuck between the teeth, that the tongue keeps worrying throughout the day, whether the mind is conscious of it or not. The tongue can't stop worrying it. One pulp-strand per poem. Sometimes a whole mouth full of them.
Posted by Renaissance Girl at 9:59 AM 5 comments:

The stream a little mightier today.

"...There is something that I must say to my people who stand on the warm threshold which leads into the palace of justice. In the process of gaining our rightful place we must not be guilty of wrongful deeds. Let us not seek to satisfy our thirst for freedom by drinking from the cup of bitterness and hatred.

We must forever conduct our struggle on the high plane of dignity and discipline. We must not allow our creative protest to degenerate into physical violence. Again and again we must rise to the majestic heights of meeting physical force with soul force. The marvelous new militancy which has engulfed the Negro community must not lead us to distrust of all white people, for many of our white brothers, as evidenced by their presence here today, have come to realize that their destiny is tied up with our destiny and their freedom is inextricably bound to our freedom. We cannot walk alone.

And as we walk, we must make the pledge that we shall march ahead. We cannot turn back. There are those who are asking the devotees of civil rights, "When will you be satisfied?" We can never be satisfied as long as our bodies, heavy with the fatigue of travel, cannot gain lodging in the motels of the highways and the hotels of the cities. We cannot be satisfied as long as the Negro's basic mobility is from a smaller ghetto to a larger one. We can never be satisfied as long as a Negro in Mississippi cannot vote and a Negro in New York believes he has nothing for which to vote. No, no, we are not satisfied, and we will not be satisfied until justice rolls down like waters and righteousness like a mighty stream...."
August 28, 1963
Posted by Renaissance Girl at 12:49 PM 3 comments:

As part of my renewed commitment to getting some damn scholarly work done, I'm reading a lot of essays these days on Herbert. Last night before bed, I read one that kept me awake like a horror movie, not because of its gripping argument but because it was written SO ABOMINABLY that I couldn't look away. It was like watching chaos unfold before my eyes. Its sentences were incomprehensible, its vocabulary limited. One paragraph used the phrase "the principle of" EIGHT TIMES, and not wisely but with the effect that it was the author's stock fallback piece of jargon. The argument of the piece was erratic and unfocused. If a student of mine had handed in that essay for class, I'd have given it something like a C+ or B-.

I think such horrors are a natural consequence of the publishing fetish in contemporary academia. Administrators, and increasingly colleagues, rely upon the imprimatur of publication to measure the quality of faculty research, but it's really not a good indicator. I've read a number of badly-written monographs in the last several years--one so terrible I routinely use it in class to demonstrate the patent fallibility of the published (for students who sometimes are reluctant to advance their own argument against the authority of the published text).

When I was getting an MFA in the mid-90s, I had a fellow-student with whom I'd sometimes end up walking to school out of the accident of our geographies. He would boast, every day, about his prodigious output. "I wrote a poem last night." "Wrote another poem this morning." After this had gone on for some time, I couldn't resist. "I write a poem a day!" he grinned one day, to which I responded, "It shows."

Maybe I'm just trying to justify my own slowness in writing of all modes and genres, but I'd rather people published less, and better. It's too bad the business of academia has pressed material and ideas into publication that aren't yet ready for the eyes of the world.
Posted by Renaissance Girl at 8:21 AM 7 comments:

Feeling sheepish, but I did promise....

1) He makes me call him when I go running, and then when I return home. And it's worth remembering that I run very late. And he lives two time zones to my east.

2) He calls while I'm in class and reads poems onto my voicemail. Not his own (though he is Mr. Hotstuff Young American Poet Dude). Donne's "Canonization." James Schuyler's, "Letter Poem #3." His namesake's "Your Laughter."

3) He once proved, in an argument with me, that Prufrock is a seduction poem. Which he did by lingeringly murmuring the entirety of it into my ear, in a crowded restaurant, on one knee.

4) When he proposed, he promised to make my boys' happiness his first priority.

5) He claims to love me not despite my many foibles but because of them.
Posted by Renaissance Girl at 3:30 PM 9 comments: 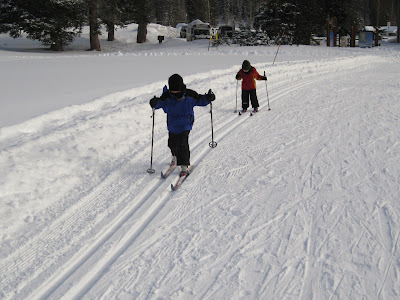 Happy Birthday to Me!

6: Days until my next term begins. Didn’t winter break used to be longer?

30: Maximum number of students I will teach this term (though I’m hoping to scare a goodly portion of those off in the first days of class….).

55: Number of students I had last term. Too, too damn many.

1: Hours elapsed between the moment last term’s student evaluations became available for me to view online and the time I viewed them. Why? Well, as we’ve established, I obsess. But I particularly obsess about my evaluations, and given the state of exhaustion in which I conducted last term I felt good cause to fear.

0: Number of critical student comments regarding last term’s courses. I guess you CAN fool all of the people some of the time.

80: Cost, in dollars, of my most expensive meal during 2008, here. (Not much, I realize, but keep in mind that I'm a vegetarian who doesn't drink.)

2: Number of regrets I feel about having skipped MLA this year—missed chance to hang with friends, didn’t eat at two delectable joints I’ve been pining for.

2: Interested presses, both of them my two fondest hopes, neither of them apparently of high enough caliber to get me tenure at my academic-snob graduate institution, according to Beloved Mentor.

0: Sentences written on the book during calendar year 2008. Shit!

1: Number of essay collections I edited published in 2008.

1: Number of translations accepted for publication in 2008.

2: Level of my satisfaction at my productivity, on a scale of 1-10, because of my lack of progress on scholarly book. Clearly I need therapy. Still.

0: Number of therapy sessions attended in 2008.

25: Amount, in inches, of snow in my yard in December.

2: Total number kids I have.

2: Total number happy kids I have.

2: Total number kids I have who claim that cross-country skiing is "the best thing to do on earth!"

1000000: Number I randomly picked to represent my happiness quotient at the turn of this year. Not sure whether there’s a standardized test to measure such things, but I’m sticking with my number. And this despite my urge to self-flagellate. Maybe I don’t need the therapy after all.
Posted by Renaissance Girl at 9:36 PM 14 comments: