1) How is it possible that senior English majors, on the cusp of graduating, don't know how to write an analytical paper?

3) Why is Henry Vaughan so much less interesting to me than all the other devotional poets? I mean, he's got the same issues, formal inventiveness, and even a bit of Royalist frisson. But it's like eating cream of wheat, as opposed to Donne's Tom Kha Tofu and Herbert's souffle and Crashaw's (....um....blood pudding seems too easy....how about:) dark-chocolate-dipped fresh ginger root. I like cream of wheat. A lot, in fact. But it just doesn't seem as satisfyingly substantial.

4) Why have housing prices tumbled everywhere but in the neighborhood where I'm buying out Kids'FabDad for half the equity? Ouch.

5) Am I displacing my academic and personal anxieties onto Barack Obama's campaign? Feeling better about my life through his progress?

6) How much time is it going to take to get my [Foreign Language] fluency back to fighting trim? And when am I going to have that time?

8) Am I ever going to climb out from under all this teaching so that I can a) produce a conference paper by April 3, and b) get back to the book WIHMD?

Sadly, none of these questions are rhetorical.

The question alerted me--or reminded me--that creative writing and literary criticism are perceived as somehow at odds within academia. Certainly when I was completing first creative and then critical graduate degrees in the 1990s there was no small amount of hostility between writerly-types and literary scholars (who seemed to think of one another as dilettantes and pedants, respectively). Marjorie Perloff touched on this subject in the MLA Newsletter in Spring 2006, where she defended the inclusion of creative programs in academic departments; the fact that she felt she needed to write such a defense indicates that the mutual unease persists. In my own department, some literary faculty exhibit a bit of snobbery toward the creative writers, the implication being (I think) that they're (er,.... we're) not doing REAL work, but are rather sitting down in a field somewhere communing with the Muse. (The fact that I began that phrase there by separating myself from "them" indicates that I myself harbor some of that prejudice, or at least don't want to be tarnished by it. Let's face it: my pseudonym here ain't "poetry girl.")

It's always seemed a strange and artificial division to me. I never check my poetic sensibilities at the door when I embark upon scholarly work, nor abandon my analytical and critical faculties when I sit down to creative work. Critical work and poetry represent to me the same activity expressed in two formally different modes, and the interests that fuel my research also manifest themselves in my creative work. I happen to experience the world in lines, and that certainly influences the way my attention bears upon the scholarly stuff, but I'm also deeply interested in questions that arise out of cultural and religious studies approaches to texts, gender studies, New Criticism, New Historicism, Deconstruction, etc., etc....and these concerns absolutely influence the poems I produce.

I've just given my senior research seminar, whose scholarly focus is the development of the devotional lyric from antiquity onward, an assignment to write a devotional lyric. The poem they write has to be accompanied by an essay explaining why what they've written is a devotional lyric, according to the terms of the course so far. My guess is that writing a devotional lyric will teach them heaps and heaps about this major subgenre of lyric poetry--perhaps more than talking about it all day will (though we do that too). We'll see. I have to say, I'm really, really excited to see the results.

And for the record: writing a poem is, for me, WAY more difficult than writing a scholarly essay.
Posted by Renaissance Girl at 5:25 PM 1 comment:

Reading Flavia's post of 2/11 inspired me to start thinking in advance, about a course I'm teaching next year. I've proposed a graduate seminar on the Faerie Queene (though, ultimately, we will take in much of Spenser, I suspect). I decided to teach this course in part because it always bothers me that undergrad courses tend to cover only Book One (perhaps, as a poet, I'm insulted on Spenser's behalf), and in part because it's absolutely not my area of specialization and I felt I needed to shore up my own understanding of Spenser's place in Ren lit. But I'm going to need to incorporate some readings in criticism, and there...I get a little haphazard. I'm hoping that wiser folk will be able to direct me to texts that I must look at, either for my own edification or for inclusion in the syllabus. What are the seminal articles on FQ? or Spenser generally?
Posted by Renaissance Girl at 8:32 AM 4 comments:

In the midst of a massive project to load all my music onto itunes--a project I resisted for ages because of my affection for the material artifacts of music listening, like reading liner notes and looking at cover art--I have been unearthing lots of stuff I haven't listened to for ages. Some of it ends up on the soundtrack to my nightly running. Last night, Orchestral Manoeuvres in the Dark. And wow, but it does not age very well, though I must say that as a band (such as it was) they improved as they stayed at it: the music they produced at the end of their run was actually more complex, more sophisticated, than at the beginning. Still, they are quite firmly a creature of the mid-eighties, and their style (or perhaps oeuvre) doesn't quite sound relevant anymore.

But here's the thing: I defy any woman (or man!) of a certain age not to smile and think affectionately of Duckie in Pretty in Pink when "If You Leave" is playing. Yes, social outsider Molly Ringwald runs off with rich and popular Andrew McCarthy at the end, but everyone who watches the film knows that Duckie is the real catch: he's quick-witted, he non-conforms, and he provides whatever measure of Restoration-comedic/1930s-screwball banter the film manages. Why would anyone choose the beautiful guy over the smart and funny and quirky one, who'll go to the mat out of sheer decency? Give us Duckie, give us Lloyd Dobler.

And give us a soundtrack, so that the exhausting, frustrating, and downright disappointing moments of our lives can be both made legible and exalted. Isn't that what John Hughes movies offered, musically? In Ferris Bueller's Day Off, we see Cameron looking with heartbreaking intensity at Seurat's pointillist picnickers and the Smiths (or, rather, the Dream Academy covering the Smiths) tell us that it's longing he's feeling: "Please please please let me get what I want," go the unsung lyrics. See? Everything made clear and comprehensible, none of this bungling around trying to figure out what we feel, no need for therapy.

So whatever other scoffs you may wish to direct at O.M.D., consider how they have organized for us Duckie's complex of emotions as the redhead he loves finds the culmination of her joys in the other guy. The attempt to render ephemeral and unspeakable experience legible: that's part of what lyric poetry does.
Posted by Renaissance Girl at 8:52 AM 8 comments: 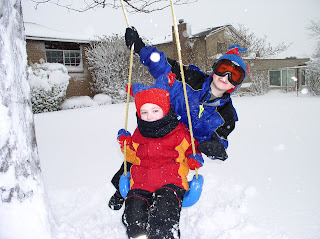 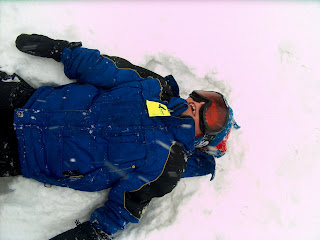 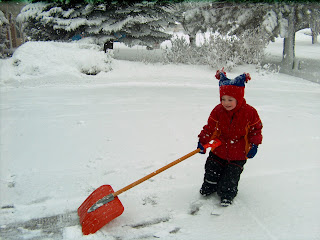 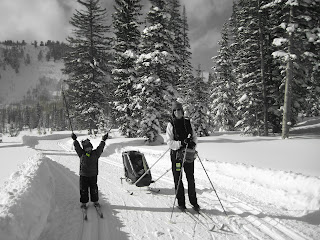 Which is to say, when I think about what's on my professional plate in the next three months, I get this low pressure system swinging through the guts. I remember once when I was an undergrad, our class complained to the graduate student TA about how busy we were--the implication being that we were too busy to deal with the assignment soon to come due. The TA responded, with admirable equanimity and a gentle and indulgent smile, that undergrads should never complain to grad students about how busy they are. The truth of his observation was driven home to me when I was a grad student teaching undergrads. But even then I couldn't believe that it might possibly also be true that grad students shouldn't complain about how busy they are to professors--after all, professors are living the high life, right? No dissertation to write and all that time spent just reading books and teaching a couple of classes...
Posted by Renaissance Girl at 9:29 PM No comments: